I’m writing this with about an hour before we head back to the vet to do what all pet owners eventually have to be prepared to do. She lost her ability to control her legs well enough to stand up, probably due to a lower back disk out of place. At 14, there really aren’t a lot of options for fixing her. As all dogs do, she’s counting on her pack leader to take care of her and make the right choices. Since 2006, Izzie was my faithful companion. We’re sorry to say goodbye.
I know her birth year well – it was 2006 was because Donna had just bought a brand new car – a 2006 VW Passat. Leather interior, perfect paint, that new car smell. She was driving to Smithville to visit her mom. Passing through Doweltown on Highway 70, she encountered a filthy puppy out on the highway. Izzie wouldn’t get out of the road. She was covered in ticks, weighed 12 pounds under weight, had red mange. Well, Donna scooped her up and put her in her brand new leather covered back seat and took her straight to Scott Little at Dekalb Animal Hospital. After losing count at 60 ticks, they got her medicated and on the way to becoming a strong dog. 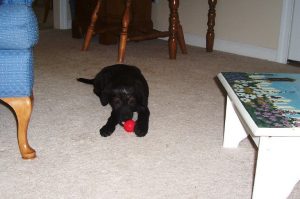 Donna’s momma kept her as her dog (and she still is her dog in my mind) for about a year. She mostly pee’ed in the house (which she even did here this morning). She chewed several holes in her carpet. She was a complete little shit. So we brought her back to Nashville where she continued to be a little shit. Izzie used to fight and lose to my old Holly dog. She’s missing a canine tooth where they fought, I pulled them apart, and her canine tooth popped out out on the floor. With all her faults, we still loved her and always will. On the other hand, I don’t think Holly ever loved her and wished she would leave. Two girl dogs… 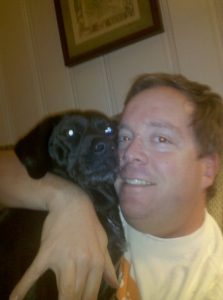 Izzie enjoyed getting out and running all over the neighborhood, and stayed on leash outside the fence until she got older when she couldn’t really make the great adventure runs she did as a youngster. When we were spending our last minutes together, I remembered and told the story of how she trained with me for the half marathon I ran.  It was hard to remember her as a young vibrant dog.  After the divorce and I moved to the country, I could see her off in the distance exploring the neighbor’s yard across the street. I didn’t allow this. She just had a way of sneaking away.

There was nothing she loved more than laying on the couch with me, snuggling way up between my legs, head right in my lap, feet in the air against one of my legs. When Murphy cat arrived she tolerated him, and even let him snuggle on her. Bitty cat would purr and rub up under her chin. She always wanted people food, which she never got, but her last minutes she got a good helping of ham and turkey lunch meat. She really enjoyed that. I probably should’ve given her a little in normal times. 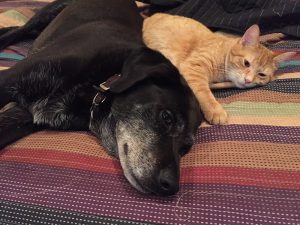 Though the last few years Izzie hasn’t been getting around real well, I’m going to miss her being in our space. It’s going to take a long time to stop watching out for her when I move around the house. She was always excited at breakfast time and dinner. She could barely hear lately, but she could hear when the boys barked at something, so she would make a squeaky bark and keep them going long after they realized it was nothing. Her big lump under her chin made her squeak bark, and she squeaked when she drank water strangely!

Izzie is survived by Shaggy, Rocky, Murphy cat, Shelly cat, and will hopefully be reunited somewhere over the “rainbow bridge” with Holly Dog, Joe Dog, Jetty cat, Lily Bug cat, Bitty cat, Scooby dog. My friend once told me, “If you could have saved her, she would have lived forever.” 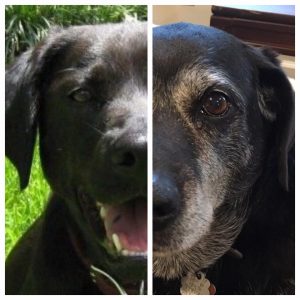