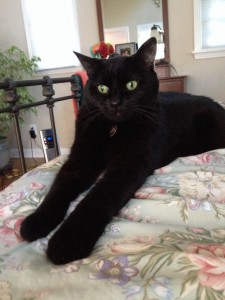 When you’ve had the company of a pet for 15 years, it gets hard to remember the time when they first come into our lives.  This is the story of our Jetty.  I remember there were three stray cats in the backyard of our new (old) house when we moved.  I didn’t think much of cats.  There was Momma Cat, Brave Heart and Scaredy Cat.  The previous owners had been feeding them regulary so they were normal outside visitors.  When we showed up, they taught our Holly (our dog) valuable lessons, such as a hiss is usually followed by a swat with sharp claws.  About the time we moved in, Momma Cat had a litter of three.

We caught the black one, the tabby and Momma Cat disappeared with the little silver one.  So that left us two.  Of course I was adamantly opposed to having a cat.  Granny thought cats felt hollow inside.  My mom, brother and sister were all allergic.  By some miracle I wasn’t.  I insisted that we find them adoptive homes.  So, Donna found a home for the first one and cried for two days over giving up that cat.  So, the little black one stayed.

Jetty was barely big enough to fill your hand.  Though he was small, he zipped around the house jet-fast, dashing at high speed from under the bed, under the dresser (my arm wouldn’t fit), behind the couch.  He was jet black.  He became the Famous Jet Jackson, according to our nephew Ethan.  He was nothing but the cutest kitten ever, and could be called nothing but Jetty.

Jetty was only preceded by Holly.  As a puppy, she chased him relentlessly.  He only cowered, never fighting back with the hiss and the swat.  He would be covered in slobber from her mouthing him, eventually being the pacifist enough that he was no fun for her to play with.  He was seceded by Buggy, who was his ultimate playmate until we got Bitty.  I think Bitty reverse adopted him as her momma, and butted Buggy out to her independent nature.  Jetty was always the pacifist in the bunch.  He was besties with Dawson the Cat, Joe the Dog, and of course Holly and Izzie who might wonder where the heck he went! 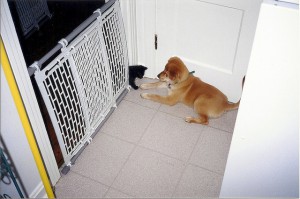 Jetty loved to claw couches, chairs, seat cushions, and every now and then a scratching post. 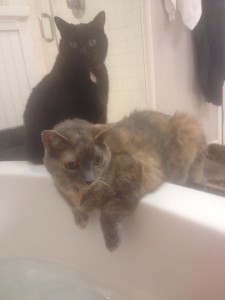 He loved to go outside.  There was nothing he loved more than getting a few minutes on the deck, the sun, the birds, the bugs, the grass.  On his last day, he was so weak, but had a shot of adrenaline that made him feel good, when we took him out to spend time in the grass.  For the first time, he chased a rabbit that Izzie flushed halfway across the yard!  I was so proud of him, chasing something bigger than the occasional lamp moth.

Jetty didn’t like me that much.  He considered me a functional partner, but not a soul mate.  The only time he would pay me any attention was on a four-cat night, when it was so cold all four cats layed all over me.  It’s ridiculous to think I had to work all day, but I never wanted to turn over and disturb him sleeping between my legs.

But oh Donna.  They had a love affair that couldn’t be matched.  When he needed more than cat love, it was on her lap.  He never ran away when she petted him.  I always thought it was something in her touch, it was something I could never match.  They loved each other so much.

Jetty has jet black, all except an odd tiny white spot on his left front leg.  Donna believes she’ll know it’s him in heaven when she finds that spot.  I like to think that too.  He is so sorely missed.  If you see him up there, make sure you scratch him under the chin.  But you have to do it just right, like his Momma does it.

RIP Jetty.  We will miss you so much. 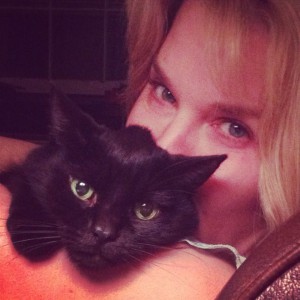