I met State Senator Jim Tracy, Chairman of the Transportation Committee, at the Fiddlers Jamboree in Smithville several years ago.  He was campaigning the crowd.  Of course I struck up a conversation with him about alternative transportation (bike/ped) and we started having a very good interaction.  He finally asked where I was from.  When I told him Nashville, he was almost rudely dismissive with me.  That tells me either he didn’t want to waste his handshaking time, or he’s just not interested in meeting and understanding people and issues across the state.

Then along comes AMP – a bus rapid transit project being developed to support growth along the dense and growing West End corridor, and serve to demonstrate to Nashville that transit (and alternative transportation) really works if you go “all in.”

Example of a separated lane and a stop on a Bus Rapid Transit line: 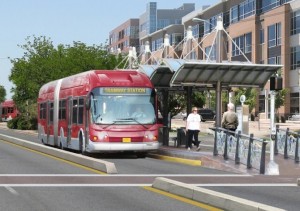 A portion of AMP funding is planned for using state transportation funds, which is a typical thing to do.  Considering Nashville generates a tremendous number of jobs, tax revenue, economic draw, and the amount TDOT spends on giant 4-lane highways to nowhere such as Corridor K, or the amount they spend to straighten highways through ecologically sensitive areas like Ocoee, it seems like the money Nashville is asking for would be small change.

So enter Lee Beaman.  He’s the owner of a very large car dealership, is a huge contributor to the Republican party, and arguably the most powerful opponent to the AMP.   Marry him with Jim Tracy, Tea Party puppet, and you have a recipe made for holding Nashville back.  And remember this next time you think about giving him some of your money.

During transportation committee hearings, Tracy amended the transportation funding bill with language that restricted state transportation funds to deliberately kill AMP, after quote “What’s it called, Amp? Those signs that says, “No Amp,” or “Yes on Amp,” those?”, after Beaman was obviously heavily lobbying him on it.  No Jim, citizens and your fellow committee members are not that stupid.  Why would you implement specific legislation to kill a project you don’t understand?

So this is how politics works.  A Senator from a rural district, lobbied heavily by big money contributor to his party, creates a problem for an important project in an urban area, which happens to be an island of Democrats with a Democrat mayor and growing like crazy, because a wealthy conservative and vision-less car dealership owner doesn’t want it.

For now, just know that big cities with a growing urban core have different needs than small towns.  I wouldn’t expect someone that lives ten miles from the nearest grocery store to understand these things.  So my next rant will either be highlighting stupid legislation elected state representatives of our more rural Tennessee communities continue to pass, or I’ll outline the top arguments against alternative transportation, such as the AMP, that are complete nonsense.

In the mean time, here’s some reading material.  When you read any of it, separate the FACTS from the STORY.  Is it something that someone thinks with little regard for real data, or is it facts created by scientists, engineers, professional planners and road designers?

(just for the record, their solutions to fix the challenges of Nashville transportation include self driving and flying cars.  You’ll also see that their facts are stories designed to mislead the uninformed.)

(I included this so people will understand that there is actually science to road design, including BRT, lane design, design for capacity, impacts of signals and crosswalks, etc.)