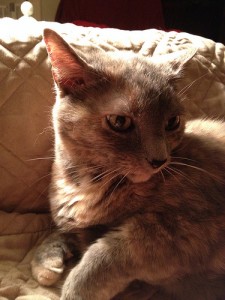 I remember the first time I laid eyes on her.   Donna and I had caught Jetty as a stray kitten and we thought he needed some company when we traveled.  A friend of Donna’s knew a guy Tom, who was renting an apartment and was moving.  He had three “teenage”  cats that he couldn’t take so we decided to go pick one out.  I’ve never really liked scaredy cats – a stranger comes in and they run like some kind of demon has entered the house.   Honestly I never liked any cats until our first one.

We arrived at Tom’s.  He lived in an old house, upstairs apartment, hardwood floors.  The place was a mess because he was packing to move.  As soon as we walked, in, yep, this crazy tortoise gray teenage cat, crooked tail that kinda pointed forward automatically (must’ve been the way she was in the womb they say) emerged and immediately greeted us, meowed like crazy, insisted on being petted.  The other two never came out.  It was my pick, so it was an obvious choice.  Buggy was coming home with us.  I remember it so vividly.  (break for tears here!)  Oh, by the way, her “fancy” name given to her at the shelter where Tom got her was Lily Bug.  That’s how she signed checks.

She and Jetty were immediately buddies.  Holly was a young teenage dog and had no cat-discipline, and chased them both mercilessly.  But, when Holly was resting, Buggy would speed through the house, slide across the floor right in front of her, bow up her back, tiptoe’ing on her claws, then speed off across the house, hoping Holly would chase her, which she would gladly do. 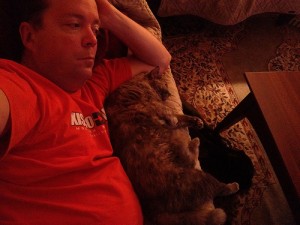 Buggy was the Cirque de Soiel acrobat.   She would make brave leaps across open areas to reach the top of that kitchen wall cabinet, or the top of the china cabinet.  When she was young, the tops of everything had to be cleared of valuable breakables.  She sometimes wouldn’t make it.  Donna and I both remember her making a big leap for the kitchen wall cabinet and missed.  I swear it was like a Road Runner Coyote cartoon – she slid down the side of that cabinet in slow motion.  Not sure how she did it, but there weren’t even claw marks.

Buggy was a step above the stereotypical curious cat.  ANY time she found a closet door open, she’d sneak in.  This resulted in a cat-check before closet doors were ever latched closed (I usually left them cracked.)  If a basement door was left open, the first cat down the stairs was Buggy.  When we rem

odeled the kitchen, there was a cat-head-sized hole in the sheetrock about cat-head level.  Inside the hole was actually the space between the bathtub and the kitchen wall studs.  We kept hearing Buggy meowing, and finally out popped her head!  She had to figure out how to get back out – you should never try pulling a cat through a hole by their head! 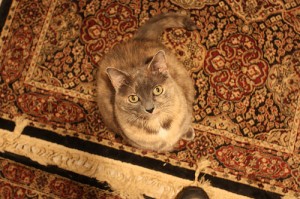 The way we met her was the way she lived her life.  When company would arrive, new or old friends, Buggy greeted them usually with meows.  When they sat down, she’d pop up right into their lap.  We had to keep those needle sharp claws trimmed back mostly for that reason.  You can always judge a person by the way they react when a super-friendly cat greets them with such affection.  When she first showed up and anyone touched her back, it’s like every nerve in her body would fire up, usually making her behind stick way up in the air! 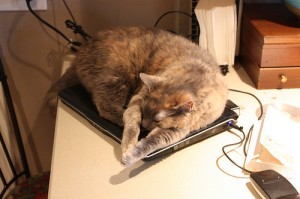 Buggy had this super light whispy fur.  When you petted her, the hair would clump and fly through the air like fluffs of goose down.  She would find me at the computer chai

r and want to lay in my arms, feet up like a baby.  And boy was I covered in hair afterwards.  But, she was there for all my greatest online achievements!  She did have a crazy streak where she didn’t like to be held, not even Donna, but not for me.  I’d lay on the couch and she’d cuddle right up in my armpit while I watched TV, laying her head on my arm and nap.

Buggy was always the middle child.  When Bitty arrived (our third cat) she became the one everyone picked on.  Jetty and Bitty formed a bond, and they liked to chase her.  She was there for the arrival and loss of Joe and Dawson.  She got along with the dogs fine.  Now and then she’d meow a wail at one of them to express her displeasure with their 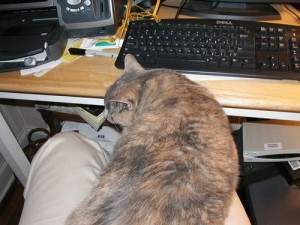 enthusiasm with feeding time.  I just watched her drinking from the water bowl the other day (oh, she loved freshly filled water.)   Izzie wanted a drink too.  She approached the oversized water bowl with great caution.    I never saw Buggy light into Izzie with her claws but it had to have happened based on this scared dog behavior!

This morning, I was taking a shower and Buggy was abnormally spending time on the warm bathroom floor with Bitty and Jetty.  I opened the shower door to warm the water up, and she walked right in.  She didn’t walk under the water, but she got wet.  Every now and then she does something crazy and I shoo’ed her out.  When I finished my shower, I went to get out and she meowed a couple of half-monotone meows at me, and she didn’t show her usual on-fire self.  Donna came in and Buggy just laid there.  We knew it was bad and it was.  At the vet’s office, my good friend Amanda found she was having a diabetic crisis.  She’s a master of hiding it, apparently as most cats are.  We had no idea she was sick and we’re feeling pretty bad about that.

We had a beautiful 14 years with that cat.  We’ll miss her enthusiasm over that fresh water bowl, her wispy hair in our mouths, her insistence for being petting even when we’re in a funk.   I’ll miss her trying to drink my bathwater – never understood that one.  I won’t miss her cat butt in my face when I crack my eyes open in the morning!   I was more or less raised as a child to dislike cats – family allergies, my grandmother was creeped out.  But Buggy’s love, energy and lust for life somehow along the way stole a piece of my heart, and it hurts more than I would’ve thought.

We’ll miss her so much.

PS – Donna and I have spent most of today 11/20/2013 telling each other funny stories and laughing about things Buggy did, and grieving over our loss.  I’ve left so many memories out, but I think what I’ve written reflects the joy we had with our cat and family member.  The memories are so raw right now, and it helps a lot to write some of it down.