So this is my BLOG.  I write something once in a while, when there’s something I want to broadcast.  I write emails for work, for nonprofit work, for personal reasons.  I write endless Facebook one or two sentence updates, sometimes I tweet.  Recently I decided to hand write a few letters.  I’m not sure how I really came up with the idea, but the Art of Manliness article says it best “Because sending a letter is the next best thing to showing up personally at someone’s door.”

In my usual Clements style, I obsess a little bit over it.  Writing a letter is something that is in your own hand.  It’s something you need to be proud of.  It takes time to think of what you’re going to write.  Even mailing a letter is a tremendous act – the envelope carried around, dropped in a mailbox, it’s slow.  What you write has to be something worthy of the effort.  There’s no spell checker, no backspace key.  What is written is what it is.  It’s much harder to write.  So, I can’t just scribble something down on a piece of notebook paper with a disposable ballpoint pen and stuff it into a bank envelope.  It has to be on good paper, written with a nice pen.  Everything has to be worthy of the experience.

My handwriting is another thing all together.  I’ve forgotten to write cursive.  I don’t practice writing that much, so my print is barely legible, letters are uneven and they’re poorly spaced.  My brain gets ahead of my fingers and I screw up crossing my X’s and t’s.  What a mess. 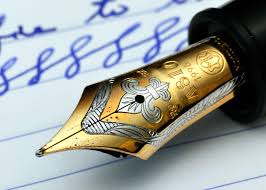 I started looking for a pen.  Since letter writing is kind of an old fashioned act, I chose the fountain pen.  I can’t believe how obsessed people are over a simple pen.  After researching them, yes, I can understand.  I bought several.  I bought a Lamy Safari and a small handful of Pilot Varsity disposable pens.  I found a carbon fiber Bianchi on Craigslist and had to have it – combining hobbies is something I love to do.  Honestly, the Lamy and the Pilots write the best.  The Bianchi is heavy and really makes my weak hand really cramp up.  My pen search locally finally, after I mail ordered everything, found Nashville Trunk and Bag (they don’t have a website, which sucks.)  They carry lots of nice stuff, including Lamy.  One thing that’s kinda fun about fountain pens is the variety of inks.  You can find burnt red or brown, dark greens, blue/black, things the reader looks at and suddenly realizes “that’s not black!”  On some nice paper, I think that’s kinda fun.

Paper is another thing.  I found nice half-sheet Crane Paper at several places around Nashville.  It’s 32lb paper, it’s cotton based, comes with envelopes and it feels nice in your hand.  Cotton will apparently last a LONG time because it’s missing the acid that’s present in wood pulp (that probably means someone could hang onto my letter for a long time.)  I don’t really like the cotton content though – fountain pens kinda scratch across it.  I’d like to find some nice smooth paper that does the same thing – feels very quality in your hand, has a “manly” feel to it.  Letter paper like that is easy to find, except it usually has a ladybug or a teddy bear or a flower or some kind of crap in the corner.  I’m going to keep hunting.  For now, it’s Crane until I use it up.  I’ll probably hit a printing company to make me some letter paper.

Since letter writing is an investment in material, brain cycles (if you try to be thoughtful about the person and what you’re going to say) it’s important to prioritize/choose the recipients carefully.  So far, I’ve written and mailed two letters.  Both are to people I wish I could see more often.  That’s how I’ve prioritized – people I wish I could see more but i don’t, for a variety of reasons.  I think the first two, I could write them every day and it wouldn’t make up for the time that’s passed where I didn’t see them.

So what’s next?  I think I’ll buy a journal and take it places and write about the things I see, or the thoughts I have.  It seems like a logical next step.  And it’s a good reason to put some cool ink on some cool paper.

Well, I hope you’ll pick up a pen, grab some paper and an envelope and mail a letter to someone.  Yes, it’s scary, yes, it’s easy to make mistakes.  Heck, I probably sound like a complete babbling idiot in my letters.  But, I’ll get better, and I think the recipients will appreciate my letters.

<here’s where I’d sign my name if this were a written letter!>